“The film has New York energy. It is sharp and original with a taut narrative arc that grabs us and continues for its entire length…”
Indiewire February 14, 2013

“…Christensen has constructed an intriguing drama out of the way random events can change a life… It is an irreverent and ironic journey to the dark side.”
Los Angeles Times February 01, 2013

“A Masterpiece in 19 Minutes… Curfew is a condensed and whimsical piece of poetry and pain, a love letter to New York City and New York movies, entirely entertaining, gorgeously shot, with a sucker-punch of an ending.”
The Sheila Variations January 29, 2013

“Ptacek is a standout—she fully inhabits the precocious Sophia with a screen presence usually reserved for adults.”
34th Street February 14, 2013

“Curfew” is a sensitive exploration of the strife and reconciliation of a suicidal New Yorker and his abused sister, a single mother with a precocious daughter.”
The New York Times January 31, 2013

“…bravo to directors like Shawn Christensen who create more movie magic in their short films than most manage on a feature-length production. Curfew is another short film I wouldn’t mind being given the top prize in cinema.”
Awards Circuit February 01, 2013

“An incisive look at depression and family relations, “Curfew” is at once hilarious and thematically rich.”
The Film Experience February 04, 2013

“The resulting package is thrilling, and young Fatima Ptacek’s performance as the niece should earn her plenty more work.”
Bright Young Things February 01, 2013

“Curfew is one of those short films where the characters are so well drawn, the acting is so convincing, and the environment is so fully realized that these characters seem to exist well outside of the parameters of the brief film they’re in.”
Film School Rejects February 05, 2013

“It’s a vibrant film, pulsing with life and energy that refuses to put simple Band-Aids on complex problems, instead choosing to celebrate life in all of its messy glory. This one’s a winner”
From the Front Row February 01, 2013

“This is a fully realized piece of work. Life-long relationships are delicately explained through the characters’ raw and vulnerable emotions towards one another.”
I Heart Movies February 05, 2013

“Shawn Christensen has a strong visual sense and a slightly twisted sense of humor, and puts both to good use as he takes “Curfew” in directions you never would have expected.”
Playback January 31, 2013

“The best film of the entire series is Curfew.”
Honolulu weekly January 30, 2013

“Perhaps the most interesting of the live-action shorts is “Curfew,” set in the seedier neighborhoods of New York.”
The Boston Globe January 31, 2013

“Two years in a row, Shawn Christensen is at the head of the Tribeca pack… This is the work of a rapidly growing filmmaker.”
Movies.com April 30

“I was humbled by its vulnerability, its honesty. This short is nineteen minutes of no bullsh*t – sentimental impact, and despite its heart-warming punch to the chest, Curfew is anything but cliché.”
The Movie Banter April 25 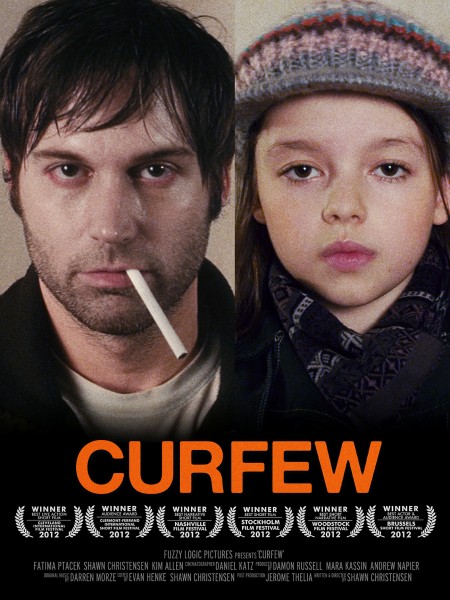